Learning Goals of Lesson 2
By the end of this lesson, I﻿ can:
-identify equivalent ratios
-write equivalent ratios by multiplying/dividing with a factor
-compare ratios using equivalent ratios, part/whole fractions,
and decimals
-create a graphical display of equivalent ratios
Video 1: Use of Ratios in Sports
Video 2: Equivalent Fractions
You can use the fraction key on your scientific calculator to reduce fractions to the lowest terms to check if your fractions are in fact equivalent.
Video 3: Equivalent Ratios
Video 4: How to Determine if Two Ratios are Equivalent
You can also write the ratios in fraction form and determine if the two ratios are equivalent by dividing the numerator of each fraction with its denominator and check if the resulting values are the same.
We can use "Equivalent Ratios" to compare ratios.
We have to fix one term of the two given ratios to a number which is the product of the two given terms. See the example below for the steps. 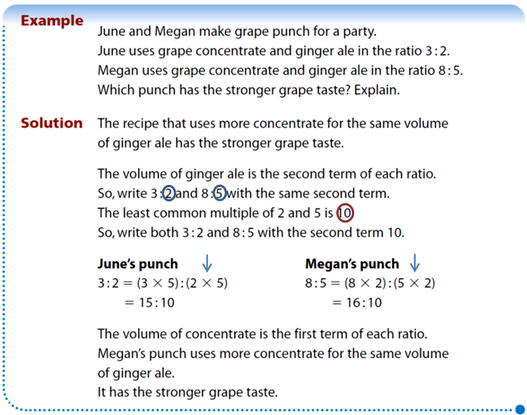 Congrats! You have reached the end of Lesson 2!!